Millennials are facing a shortfall compared to other generations when it comes to their paychecks.

Overall, millennials earn 20% less than baby boomers did at the same stage of life, according to “The Emerging Millennial Wealth Gap,” a recent report from the nonprofit, nonpartisan think tank New America. Specifically, median earnings for those 18 to 34 are lower than they were in the 1980s, a disparity that was first noted in a 2017 report from the non-profit Young Invincibles. And the flow of today’s paychecks is less predictable due, in part, to the effects of the Great Recession and a rise in contract and freelance positions that may be less consistent in hours and pay.

That’s in spite of overall higher education levels. Nearly 40% of millennials 25 to 37 have at least a bachelor’s degree, compared to just a quarter of baby boomers and 30% of Gen X when they were the same age, Pew Research Center found.

These lower wages may lead to long-term problems for this generation, experts say.

Lower-income levels are already having a long term impact on millennials’ ability to accumulate wealth, either through savings or home equity. “Millennials are going to be on a completely lower trajectory than previous generations,” says Reid Cramer, director of the Millennials Initiative at New America.

The generational wealth gap has reached “historic proportions,” Cramer says. The average millennial’s wealth in 2016 (ages 23 to 38) was 41% less than those who were at a similar age in 1989, the report says.

Part of that can be attributed to the Great Recession and its aftereffects. Those who entered the workforce following the recession had fewer job opportunities and lower wages, starting them off at a disadvantage. At the same time, many faced higher college tuition costs, leading to higher student loan and personal debt rates, the report finds.

The recovery was not experienced by everyone, either. “Even as the economy steadily added back jobs lost, the protracted recovery was experienced unevenly, with well-off households doing better at the expense of others,” Cramer writes. 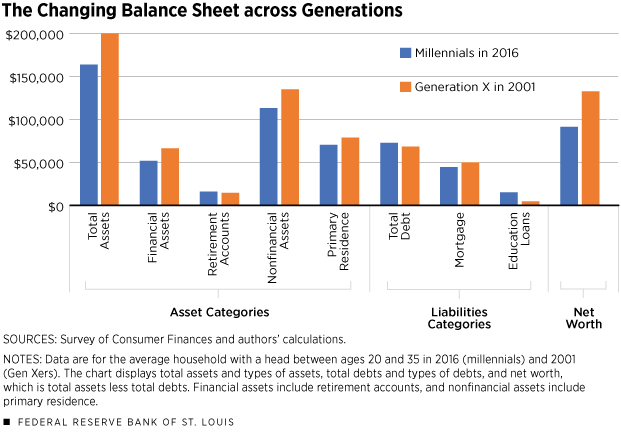 Millennials held an average of $162,000 of assets compared to Gen X’s average of $198,000 at the same age, according to the St. Louis Federal Reserve.

These income and wealth challenges have transcended into other trends for millennials, specifically with fewer in this generation getting married, buying homes and starting families, or experiencing delays in these life milestones. For example, marriage rates among millennials are estimated to drop by 70% and a record number will remain unmarried by age 40, according to the Urban Institute.

That may affect millennials’ ability to retire comfortably and pass on wealth, since homeownership, in particular, is still one of the most secure ways to build wealth and one of Americans’ biggest chunks of equity. “There’s just less available to do everything else with, including build wealth and save,” Cramer says.

This has potential fallout not only for millennials but also for future generations, says Liz Hipple, senior policy advisor at the Washington Center for Equitable Growth.

“It means there are less financial resources for investment in tomorrow’s generation,” she says. If millennial families have less money to spend on their children’s health and education, then it may have negative implications for those children’s earning potential.

“It matters for our kids and their outcomes,” Hipple says.

Digital analytics, optimisation, data science or programmatic expert, and looking for a job?

Decision-maker looking to expand your team with top-tier talent?