McDonald’s has vowed to ensure all of its packaging is made from renewable, recycled or certified materials by 2025.

The restaurant chain will aim for all of its 37,000 restaurants around the world to be recycling by the same deadline.

Currently only half of McDonald’s packaging is made from sustainable materials and only 10 per cent of its outlets recycle, the company said. 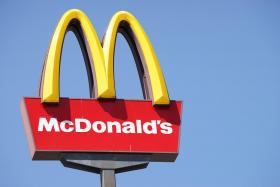 It did not set a target for the proportion of waste to be recycled.

The announcement comes after Iceland became the first major UK retailer to commit to eliminating plastic packaging for all its own brand products. The supermarket said it would replace plastic with packaging made from materials including paper and pulp.

McDonald’s would be one of the companies most affected by a 25p latte levy on disposable cups, proposed by MPs on the Environmental Audit Committee this month.

Friends of the Earth waste campaigner Julian Kirby welcomed the move but said, “speedier action in some countries, such as the UK is surely possible”.

“With retailers such as Iceland planning to freeze out plastics from its own brand products in five years’ time, the Government’s aim to ditch avoidable plastic within a quarter of a century looks extremely meagre,” he said.

A spokesperson for McDonald’s UK said the company was committed to reducing its environmental impact and continues to “challenge ourselves and our supplier partners to help evolve our thinking, and this includes the recycling of coffee cups”.

The spokesperson added: “Since 2015, we have been installing recycling units which can now be found in over 1,000 of our UK restaurants, enabling our customers to easily separate paper cups from other waste packaging in order for them to be recycled.”

The latest move comes after McDonald’s updated its environmental policy to include the aim to axe polystyrene packaging from restaurants across the world.

Business picture of the day

Last spring, 32 per cent of McDonald’s shareholders voted for a resolution to end the use of containers made from polystyrene, known as foam in the US.

The policy on the company’s website has been updated with the additional line stating that the fast food giant plans to “eliminate foam packaging from [its] global system by the end of 2018”.

McDonald’s made no announcement about the policy and did not confirm when it had made the update. An archived version of the web page from August did not contain the statement about foam cups.