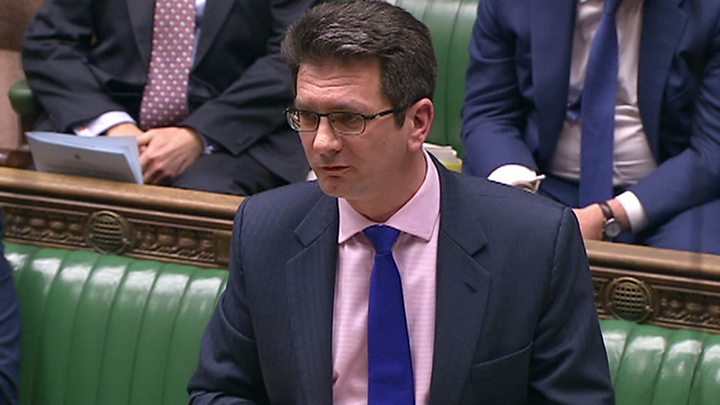 Ministers have sought to play down the leak of a government document predicting an economic hit from Brexit.

According to BuzzFeed, the report concluded growth would be lower in each of three different Brexit outcomes than if the UK had stayed in the EU.

But Labour said it should be published and the SNP said it was a “watershed” moment in the Brexit process.

Eurosceptics said other forecasts had been wrong and this one should be taken “with a pinch of salt”.

According to Buzzfeed, the leaked document, titled EU Exit Analysis – Cross Whitehall Briefing and drawn up for the Department for Exiting the EU, suggests almost every part of the economy would suffer.

It looked at scenarios ranging from leaving with no deal to remaining within the EU single market.

Responding to an urgent question in the Commons, Mr Baker said the document was “not anywhere near being approved by ministers” and that ministers in his team had only just seen it.

He described the document as a “preliminary attempt to improve on the flawed analysis around the EU referendum” and said it did not asses the government’s preferred option of a bespoke free trade deal.

It “does not yet take account of the opportunities of leaving the EU”, he said, adding that civil service forecasts were “always wrong and wrong for good reasons”.

Responding to calls for it to be published, Mr Baker said MPs would get as much information as possible when they vote on the final Brexit deal but said: “We don’t propose to go into these negotiations having revealed all of our thinking.”

And as Brexiteer MPs hit out at the leaking of the document, he said there was “clearly” a campaign to overturn the 2016 EU referendum by some people in the media and the House of Commons.

One Conservative MP, Antoinette Sandbach, told Mr Baker she took exception to being told it was not in the national interest for her to see the document.

And responding for Labour, Brexit spokesman Sir Keir Starmer said the emergency of the report was “piling absurdity on absurdity” with the government having previously denied the existence of Brexit impact assessments.

Scottish First Minister Nicola Sturgeon said: “For months, Theresa May’s government have refused to produce any detailed analysis of the potential impact of various Brexit scenarios – now we know why they have so desperately engaged in a cover-up.”

The BBC understands the Treasury contributed to the document but sources say it is part of a much wider range of work going on in Whitehall.

The report suggests UK economic growth would be 8% lower than current forecasts, in 15 years’ time, if the country left the bloc with no deal and reverted to World Trade Organisation rules.

It says growth would be 5% lower if Britain negotiated a free trade deal and 2% lower even if the UK were to continue to adhere to the rules of the single market.

All scenarios assume a new deal with the US.

Conservative MP Philip Davies blamed the report on “London-centric remoaners” in the civil service “who didn’t want us to leave the European Union in the first place and put together some dodgy figures to back up their case”.

Earlier Conservative MP and leave campaigner Iain Duncan Smith told BBC Radio 4’s Today programme the document should be taken “with a pinch of salt” as almost every single forecast on Brexit has been wrong.

A government source said the report “contains a significant number of caveats and is hugely dependant on a wide range of assumptions”.

“We have just witnessed the extraordinary scene of a serving minister telling the House that, whatever analysis his own department comes up with, he simply won’t believe it,” said the union’s general secretary Dave Penman.

“How can civil servants in Mr Baker’s department, who are working harder than ever before, now have confidence in a minister who stands at the despatch box and openly questions their professionalism?”

Speaking to The Sun about pressure on Prime Minister Theresa May, he criticised Tory MPs involved with negative briefings, saying “nothing that would happen would change the parliamentary arithmetic”.

“We don’t have a working majority, other than with the support of the Democratic Unionists, and we need to accept the reality of that. I know that there are always disappointed individuals but they’re going to have to live with disappointment.”

Mr Fox told the BBC his warning was to Mrs May’s critics that they will be “disappointed” in their efforts to topple her or secure cabinet positions for themselves.